'Thisworddoesnotexist' AI Can Create Imaginary Words On Every Page Refresh Researchers have shown that AI can imagine things. And this intrigues them that they simply want more.

Not to mention 'This Person Does Not Exist' that was considered one of the earliest that started the trend.

This time, a researcher has have created another AI to the 'doesnotexist' family.

Called 'This Word Does Not Exist', the researcher behind the thisworddoesnotexist.com website shows how AI can also be trained to be a powerful vocabulary tool.

In this case, it is capable of making up words and definitions that won't be found in any regular English dictionary like Merriam-Webster or the Oxford English Dictionary.

GPT-2 is a neural network designed to create predictive text. Created by OpenAI, its creators are even scared of it, as they warned that the AI could write convincing fake news, and it might be too dangerous to release the AI in the open.

But due to its ability, GPT-2 has been a bit of a rock star in the AI world.

Researchers have been using it to power a variety of language-processing software, from chatbots to the poem-writing AI, to the text-adventure game that can rewrite its plot, the not safe for work Bible and more.

Like other deep learning programs, the basic principle it uses is to look for patterns in data, which it then tries to replicate.

But in this This Word Does Not Exist case, Dimson trained it using 8 million web pages, scraped from the most upvoted links on Reddit.

Dimson that is a former principal engineer at Instagram, designed an algorithm to map out when words appear next to one another, and use this information to generate new sentences, and apparently, new words. 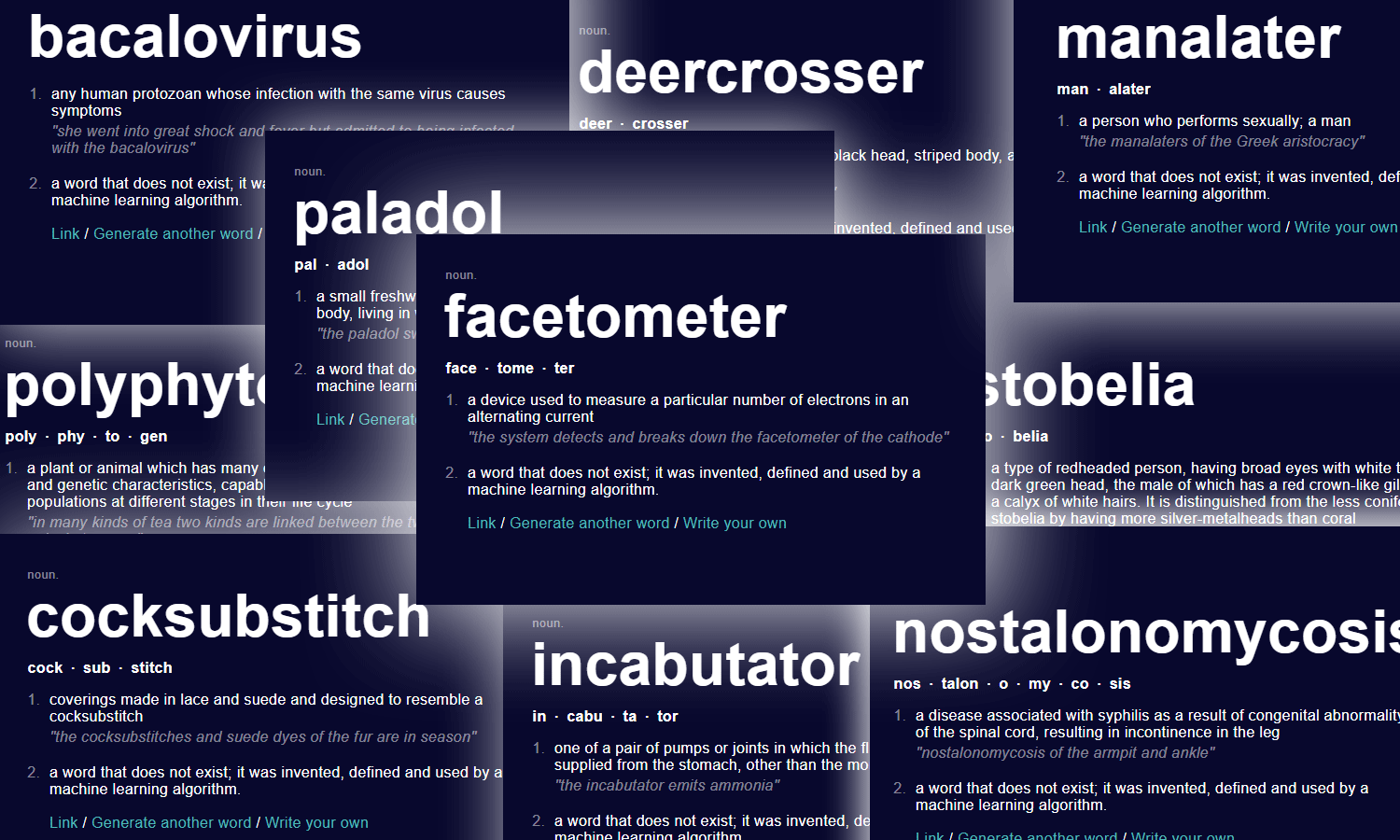 Just a few imaginary words 'This Word Does Not Exist' AI can generate. (Credit: thisworddoesnotexist.com)

The result is shown on the thisworddoesnotexist.com website, where the AI can spew out endless stream of plausible babbles.

At each and every page refresh, the AI will try to create non-existing words without caring whether or not they have any actual meaning.

But the variety of the words is truly impressive. While some words do sound like managerial nonsense, others hint some genuine etymological thoughts, with others seemed to be inspired by what the Urban Dictionary may have, while others have a powerful air of mystery and calm.

The words may sound weird, but not as unsettling as seeing imaginary people.

As fun as it can be, the AI behind thisworddoesnotexist.com isn’t perfect.

For example, it may once in a while generate words that already exist. This can happen because it's difficult for it to get a comprehensive list of all words in the English language. Dimson tried to address this issue by building a blacklist feature to exclude words which already appear in other dictionaries.

But since it is updated periodically, it may generate existing words occasionally.

Dimson has put the source code for this AI on GitHub.