The Murder Of Bianca Devins, And How Her Death Was Exploited On The Internet

The internet can be cruel and unforgiving. And Bianca Devins, a teen from New York, U.S., experienced this first hand. And also in person even after her death.

Devins was just a recent high school graduate, a student at Mohawk Valley Community College with a dream of getting a degree in psychology in order to help people with mental illness.

She was stabbed to death in Utica, a city in the New York State, on July 14, 2019, shortly after attending a concert in New York City. The case gained made headlines around the world, simply because pictures of Devins' deceased body were shared on the internet by the killer.

It was speculated that Devins was killed by an online stalker.

But after investigations, Oneida County District Attorney Scott McNamara revealed that the prosecutors believe Devins was murdered by an someone she actually knew.

It was believed that Devins even had a romantic relationship with her killer.

The name is Brandon Clark. He was 21-years-old when he murdered Devins.

Related: Grant Amato's Case, And The Murders Because Of Obsessing A Bulgarian Webcam Model One of Devins photos after the murder (blurred). The photos were first shared on Discord, before spreading elsewhere on the internet.

It all began when Bianca Devins met Brandon Clark on Instagram earlier in 2019.

After keeping their communication strictly on the platform, they started meeting in person months later. At that time, Clark attended Devins' graduation party. They quickly became friends, but Devins was also quick in realizing that Clark "wanted more" than just a friendship.

Clark often referred to himself as Devins' boyfriend despite her saying otherwise.

It was found that Clark was obsessed with Devins, that his internet history was full on her. Clark searched for her name, and frequently checked her social media accounts, and also saved many of her photos.

Clark that seemed to be Devins' stalker, grew up in an unstable family, where he experienced seeing his father abusing his mother. At one point, Clark was forced to being placed in state foster care. But still, Devins' mother described Clark as "charming" and "polite".

As for Devins, she too had experienced some rather dark past.

She was said to have struggled with mental illness that include depression, anxiety, borderline personality disorder, and post-traumatic stress disorder. These were the result of her strained relationship with her father.

Due to her illness, she was reportedly seeking refuge in online communities, where she can share and befriend with people.

Places she frequently spent online, include platforms like Discord and 4chan.

According a mental-health counselor Devins once confided with, Devins had fantasized about injuring herself by jumping off a roof.

One day, Devins and Clark was on their way to the concert and met another friend named Alex.

After smoking marijuana in Clark's car, the three went to Dollanganger's concert. It was during that time that Clark saw Devins kissed Alex. This angered Clark.

When the concert ended, Devins slept in the back on Clark's car. Clark who was jealous, tried to make Devins explain why she kissed Alex. Devins apologized, but said that they were in an open relationship, meaning that they were non-monogamous.

Clark that had his anger peaked, began assaulting Devins, and eventually repeatedly sliced her neck with a knife he hid behind his seat.

After the gruesome act, Clark posted pictures of her dead body on Discord. As if taunting Devins' male followers on the platform, Clark posted them with the caption:

"Sorry fuckers, you’re going to have find someone else to orbit."

Shortly after Clark uploaded the footage to Discord, others started sharing it on messaging boards, as well as on Instagram, with the hashtag #RIPBianca. The gruesome murder was documented on the web, and went viral for anyone to see at the time.

Quickly, the Oneida County Dispatch received numerous calls informing them that a man posted a murder on a social media site, saying that he was also threatening to harm himself.

Just when The Utica Police Department began an in-depth search for the two, Clark called 911 and made incriminating statements. Just like what the police has received from reports, Clark was suicidal at the time.

After determining that the call came from Poe St in Utica, officers were dispatched to the wooded area.

The officers found a black SUV parked in the quiet area, with a man lying on the ground beside it.

When the officers approached the man with caution, and asked where the woman was, the man said that beneath the tarp, was the female he killed.

This was when they found a colored tarp not far from the SUV where they were standing. The officers were alarmed after they noticed protruding brown hair from beneath the tarp.

And it was indeed beneath the tarp, that the officers saw that Devins suffered extensive injuries to her neck, which almost decapitated her.

After thinking that the man was unarmed and when the officers were focusing on what was beneath the tarp, that Clark took out his smartphone. it was at this time that it's believed he took photos with Devins by laying across her deceased body.

"I’m sorry Bianca," the caption on the since-deleted photo reads.

Before the officers realize what was going on after that, the man almost immediately began stabbing himself in the neck with a knife.

His life was saved after being transported to St. Elizabeth’s Hospital by the emergency care unit that arrived soon after. Clark's life was spared after he underwent emergency surgery.

At first, the police believed that Clark was angered, probably due to jealousy. But after seeking for evidence from the crime scene, they found that Clark actually had planned to murder her, as the police recovered duct tape, knives, rope and other tools at the scene of his arrest.

The police also found what seems to be a suicide note at his relative’s home.

It was reported that the police also found another message near Devins' deceased body, which reads: "May you never forget me". 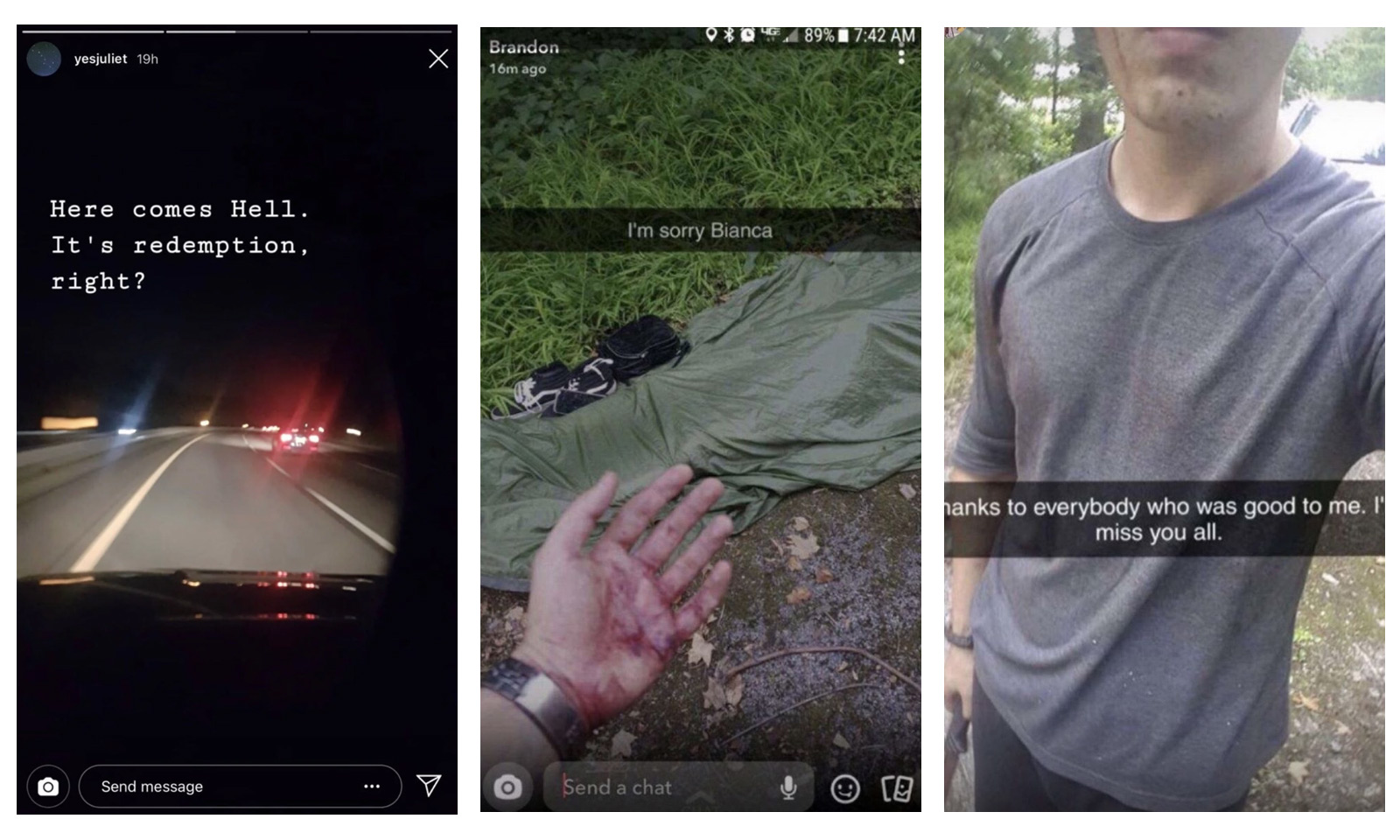 The moment Clark made for himself, before and after murdering Devins.

In the wake of Bianca Devin’s death, her photos continued to spread.

This made social media companies, most notably Facebook, to block Clark's account on both Facebook and Instagram to contain the spread. It also created signatures for the photos to prevent them from being shared, and also blacklisted the hashtag #yesjuliet.

As for Discord, it was forced to unplug the server where Devins' deceased body was shared.

Despite the attempts, people kept on spreading the gruesome photos.

The authorities, Devins' family members, and even Nicole Dollanganger herself asked people to stop sharing the photos. But yet again, the internet can be unforgiving.

Hundreds of social media accounts, both old and new, started claiming that they have all of the photos, and asked people to follow their accounts first and spread the word, if they want to see the pictures. It also spread fast on sites like 4chan.

In other words, Devins' death was exploited on the internet.

Bianca’s mother Kim has lobbied for social media platforms to amend their policies in order to stop the spread of such gruesome photos.

Kim and the rest of the family were relieved by the guilty verdict, which stopped a trial, which would have included the video footage Clark took.

Wearing an orange outfit, Brandon Clark appeared in court on September 30, 2019. A scar from the wound when trying to commit suicide is seen on the right part of his neck.

Devins was said to be a social media influencer.

But it was later suggested that her fame mostly came after he death was publicized by the media. News may have exaggerated the case, and the teen's notoriety, which in turn made her followers counts to skyrocket.

Murder that is publicized on the internet, is said to be one the ways for the murderer to generate attention and generate fame. Flaunting crimes in nothing new, and the internet (social media, forums and so forth), allow the deranged murderer to amplify the message.

This is almost similar to the murder that was orchestrated by the "Snapchat Queen" in 2016.

Investigator Peter Paladino said that Clark murdered Devins in order to differentiate himself from the other "beta orbiters". Oneida County Assistant District Attorney Sarah DeMellier claimed Clark has told "different people in his life different reasons why he did what he did".

For the murderer, this can give the feeling of having control. As a man, the murderer may feel a boost in masculinity that is connected to his social status.

On July 29, 2019, Brandon Clark, the murder suspect, faces 25 years to life in jail after he initially pleaded not guilty to second-degree murder.

With the sentencing commence for months, delays happened because of the 'COVID-19' coronavirus pandemic.

Then in June 2, 2020, Clark filed a notice to withdraw his guilty plea. This happened after Clark told the court that he started reading books about laws and started reviewing his own case. Displeased with his previous lawyer, Clark was allowed to get another lawyer.

And later for the second time, due to the coronavirus pandemic and the increase in virus cases across the U.S., the New York court systems are again limiting in-person court appearances.

This means the scheduled sentencing of convicted killer Brandon A. Clark in Utica has been adjourned for the second time due to COVID-19.

Devins' mother criticized the prosecution for portraying him as a "manipulative monster", that after it was reported that Clark's browsing history included searches on how to find the carotid artery, which is the artery that branched out directly from the aorta, which carries oxygen-rich blood to the brain via the neck.

The mother believes that Clark had planned to murder her daughter all along.

The family proposed a legislation to require all social media networks with more than $10 million in revenue and more than 100,000 monthly users to establish an office dedicated to identifying and removing violent content that violates their moderation standards.