The Odessa Catacombs, And Masha Who Survived As Internet Rumor

Beneath the city of Odessa, and also its outskirts, lie a labyrinth-like network of tunnels, known as the Odessa Catacombs.

With tunnels that run up to 2,500 kilometers, the Odessa Catacombs are considered the world's largest urban labyrinth, significantly larger than the one in Paris, among others. The networks are around three levels deep, and can reach up to 60 meters below sea level.

Most of the tunnels were built to mine coquina in the 19th century, particularly limestone. The rest were either built for other purposes, including for shelters for civilians and Soviet partisans during the World War II, as well as for smugglers, and some other plausible purposes.

But what is certain, the system consists of a network of basements, bunkers, drainage tunnels and storm drains, as well as natural caves that are millions years old. Many of the tunnels lie under living areas, and have been filled with earth, concrete or sand by construction companies. As a result many of the tunnels are no longer there.

With such huge networks, the tunnels have entrances/exits that can be seen in many places in Odessa, accounting to more than a thousand. Only one small portion of the Catacombs is open to the public, which is at the "Museum of Partisan Glory," located in Nerubayskoye, north of Odessa.

And this is why people can get lost in there, and die. 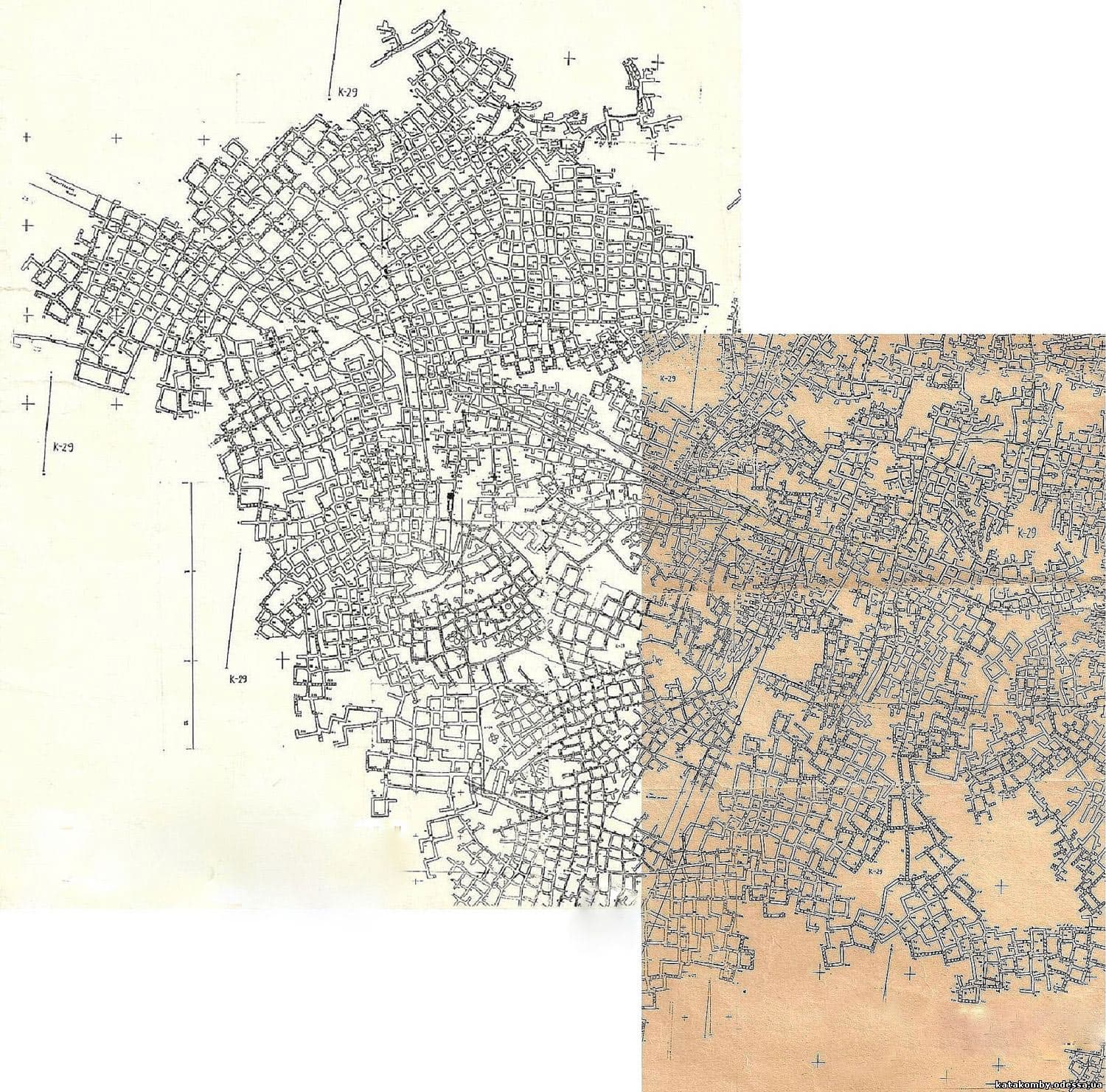 Due to that fact, people have been telling various stories about the tunnels.

And because people venturing into the tunnels are not sanctioned, the Catacombs are also famed for attracting extreme tourists.

The official Odessa city government has never sought to investigate the tunnels thoroughly. And this is why existing maps are mostly made by different groups of explorers, or those that were mapped during the works of the mine in the 19th century.

Because not all of the tunnels have been mapped, meaning that no one know exactly how huge it is.

This created even more stories that include news and more discoveries.

The stories include the tunnels haunted by ghosts, to dead bodies and human remains found inside the catacombs, World War II items, and more. There are even stories about Nazi executions, cultists, and more.

And among the many stories that came out of the Odessa Catacombs, the most famous should be the case of a girl named Masha, who reportedly went into the maze of passages and wasn't found until years later.

The story dates back to claims made in 2009 by Ukrainian explorer Eugene Lata.

Eugene wrote a widely circulated online post, stating that he and other explorers in his group found the body of a local student named Masha. It is said that she entered the Catacombs on the New Year's Eve in 2005 with her friends, and got separated from her group.

Drunk, she wandered but away from the entrance.

She went deeper into the catacombs, walking alone in pitch black, with no food or water, and has never been heard since.

Eugene included a graphic photo of what appeared to be a decaying corpse in one of the tunnels, which Eugene claimed was Masha's body.

Based on what was later found of the remains, it is believed that Masha wandered aimlessly in the networks of tunnels, with no idea where to go. She lasted at least a few days, before succumbing to either dehydration or hypothermia.

The body that was partly mummified by the cold and dry air, was found kilometers away from the closest entrance.

Masha was said to wear jeans and a pair of shoes.

It was only after the Masha story went viral on the internet, that the police came to the tunnels and had it removed.

Following the story, more people, and also explorer ventured into the tunnels, and tell their own stories.

Various message boards shared the stories, and websites began to retell the stories as fact.

They were meant to warn others to stay way, but it also lured even urban explorers to the site with growing regularity.

The official Odessa Catacombs website, calls the story a hoax.

"Besides the original photographer," the post said, "there isn't one person, civilian or law enforcement, that can confirm the story. We believe it is just a practical joke and the corpse is fake."

A 2015 investigation by Vice writer Mike Pearl also found no evidence that Marsha existed. In his investigation, Pearl interviewed, Kostya Pugovkin, a man who claimed to have dragged the corpse in the photograph up and to a police station in the hope of getting a reward.

Pugovkin claimed that he thought the body was the remains of Janis Stendzenieks, the son of a local newspaper magnate.

However, Pugovkin stated that he was then told by others that the dead person was "a Satanist who got lost".

No Masha was ever mentioned.

No one in Odessa reported anyone missing.

But what makes this story so famous is because no one is really sure if it really happened.

And also because a reported autopsy that examined the corpse, found that the DNA didn't match any missing person, but belonged to a female who was never identified.

"They say it was a girl," Pugovkin added.

Things that happened inside the Odessa Catacombs, have been made legends and folklores. There have been witnesses and some proofs, but hard evidences are scarce. With a population of over a million residents, Odessa that covers 162 km2 is the third most populous city in Ukraine, and also a major tourism center.

Its seaport and transport hub are located in the south-west of the country, and also on the northwestern shore of the Black Sea. The city is also the administrative center of the Odessa Raion and Odessa Oblast, as well a multiethnic cultural center. Odessa is also known to some, as the "pearl of the Black Sea", the "South Capital" (under the Russian Empire and Soviet Union),

It's also known as "The Humor Capital" and "Southern Palmyra".

And this Odessa Catacombs, is one of the places that made Odessa, the Odessa people know and visit.

Urban explorers are not advised to enter the tunnels, not because they can get lost, but also because they are unsafe. Cave-ins can happen, But if they do want to venture, they must plan multi-day trips, and hire a local guide.

Due to its popularity among explorers, the tunnels that have been explored, mostly those that are closer to the entrance, have series of graffiti, and even shrines.

In the end, no one can be entirely sure if the story of the ill-fated Masha is true. Besides the gruesome photo, only the yellow walls were the witnesses of who the woman was once were. Whether she was an innocent partygoer, a Satanist, or a Ukrainian drunk person who took a few steps too many into the darkness.

Based on the fact that there are confirm cases that happened inside the Catacombs, as well as its history, the Odessa Catacombs are indeed filled with gloom, death, and horror.

Regardless, the catacomb's rich history and wealth of legends, are among the reasons why Odessa doesn't have a subway system.