Apple's iOS is regarded as a more privacy-oriented mobile operating system than Android, and also a more polished one.

But still, it is an ecosystem that allows developers to make money from the users. Ads by many, are things that people can't live without. But their ethics have long been questioned, since anything that is connected to the web, can track people.

When browsing the web or using apps, people are always tracked by default.

Using trackers, companies like Google and Apple, as well as third-party providers can understand people's behavior. The information is used to create profiles of each internet user, to then be sent back to advertisers.

Websites too can use trackers for a variety of purposes.

Because people's awareness about how ads can track people is still relatively low, former engineers of Apple have worked and developed 'Lockdown', an “open-source firewall” to make people more aware of ads' intrusions.

Lockdown, according to its website, is a firewall that “blocks tracking, ads, badware, and more”.

The open-source nature of Lockdown means that users can self-verify that the app does not collect data logs. As explained by Rahul Dewan, one of the co-founders:

The app that was launched in mid-2019 claimed to have blocked more than 1 billion trackers, and revealed a user base of more than 100,000 people.

“Some companies just don’t give a flying f about what the laws say, because they can easily afford the fines, and because the political climate doesn’t exactly lend itself to serious regulatory action against mega-corporations. Facebook (who collects more personal data than anybody else) has completely ignored it, choosing instead to wait for the next slap on the wrist." 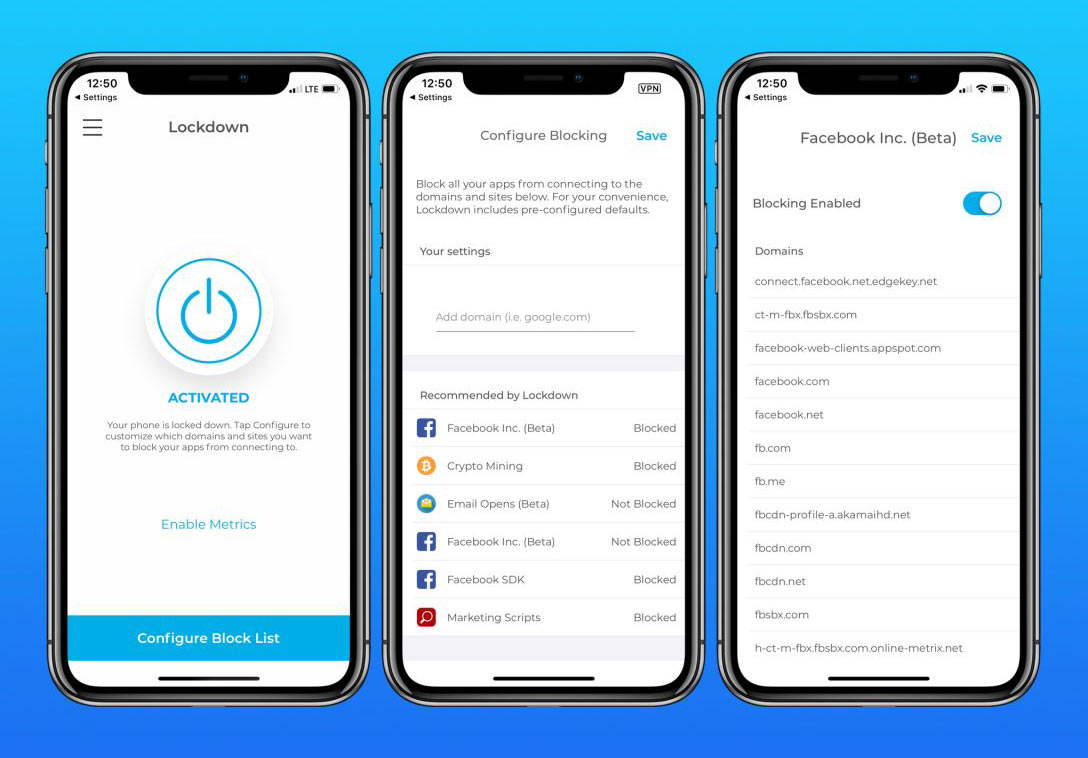 The Lockdown app on iOS.

In order words, the co-founders were trying to say that one of the major factors for the development of Lockdown is the proliferation of trackers and the nature of their practices from big players in the data game.

While there are other apps that can do things similar, Lockdown's approach is rather different.

Lockdown is essentially an open-source firewall app that block all trackers, not just within web browsers, but also those that are baked into apps. It works as an on-device firewall, meaning that it doesn't send any of users' data in order to work.

The app is simply a way to “directly block” trackers.

Lockdown also has certification from Openly Operated, which means that the service works with “full transparency”.

“We believe people and companies that build privacy products have a unique responsibility to be more transparent than any other product line. That’s why Lockdown is 100% open source and openly operated—so that anyone can see what it’s doing, and just as importantly, what it’s not doing.”

Available on iOS and MacOS, the free firewall app also has a VPN. The Lockdown app on MacOS.

The Needs To Block Trackers

Apple's devices are relatively more secured that others in the market. So why bother blocking trackers?

Trackers are unlike malware, because they are not there to "steal".

With the many websites people visit and apps being used, people are tracked every single day. Their behavior and whatever they're doing when the website/app is open, are tracked and sent back to a server somewhere across the globe.

For those who really care about privacy, blocking trackers can mean as much as keeping devices clean from malware.

"Users currently have no idea what they're sharing, who they're sharing it with, and how it's shared. We tell our devices things we wouldn't tell our closest friends and family, so why should the data and behaviors on them be available to people and companies we've never met?” said Lockdown co-founder, Lin.

Lockdown’s release comes just in time when concerns are growing about how iOS apps can share data with third-parties.