On November 28, Hawaiian volcano Mauna Loa, considered the biggest active volcano in the world, erupted for the first time since 1984.

Mauna Loa is one of 15 volcanoes located in the eight main Hawaiian islands. With the size that is roughly 51% of the island of Hawaii, the volcano stands at the bottom of the sea, 9 kilometers high.

What this means, it's actually taller than Mount Everest.

On one side, this rare eruption attracted scientists and researchers from over the world, who wish to get a better understanding about what's going on and what had happened. Some even managed to get right on top of the lava eruption with drones and helicopters.

But on the other side, the volcano's eruption also attracted lots of social media users.

One of the very first, was TikToker SamanthaMase.

While she didn't get to near to the volcano's caldera, her “frighteningly beautiful” footage of the Mauna Loa eruption in Hawaii went viral.

The reason is not only that she was the first, but also because she did manage to provide unique viewpoints.

Her first post, which she made from her home, showed the stunning glow in the night sky, briefly after the eruption started.

And later, in a follow-up post, the TikToker drove towards her friend's farm, and from there, she got a more elevated look at the eruption.

"This is so freaking wild," she said.

Since the eruption isn't threatening, in which it doesn't spew lava down toward any homes or people surrounding it, even though ash and sulfur warnings are in place, some social media users are getting as close as possible to the eruption, to get astonishing images and videos to share.

Soon after her posts, it didn't take long until fellow social media users started flooding the platforms with a whole host of different videos, trends, and topics.

Thousands of awestruck onlookers became astounded viewers, and jammed a Hawaii highway that leads to the volcano.

“It’s Mother Nature showing us her face," said a nurse working on a night shift, who left her station to only see the eruption. "It’s pretty exciting.”

Tourists who happened to be on the island also headed to the location for a close-up view.

It's worth noting, that even though the eruption doesn't pose direct danger, the eruption temporarily knocked off power to the world's premier station that measures heat-trapping carbon dioxide in the atmosphere.

The station is only one amongst hundreds of carbon dioxide monitoring sites across the globe.

It's the main site for the famous Keeling Curve that shows rising carbon dioxide levels from burning of coal, oil and natural gas that tracks with rising temperatures.

Levels of carbon dioxide at Mauna Loa have increased 33% since 1958.

But regardless, this Mauna Loa’s eruption doesn’t seem to be spewing nearly enough aerosols, and its carbon dioxide emissions are nothing compared to the burning of fossil fuels. 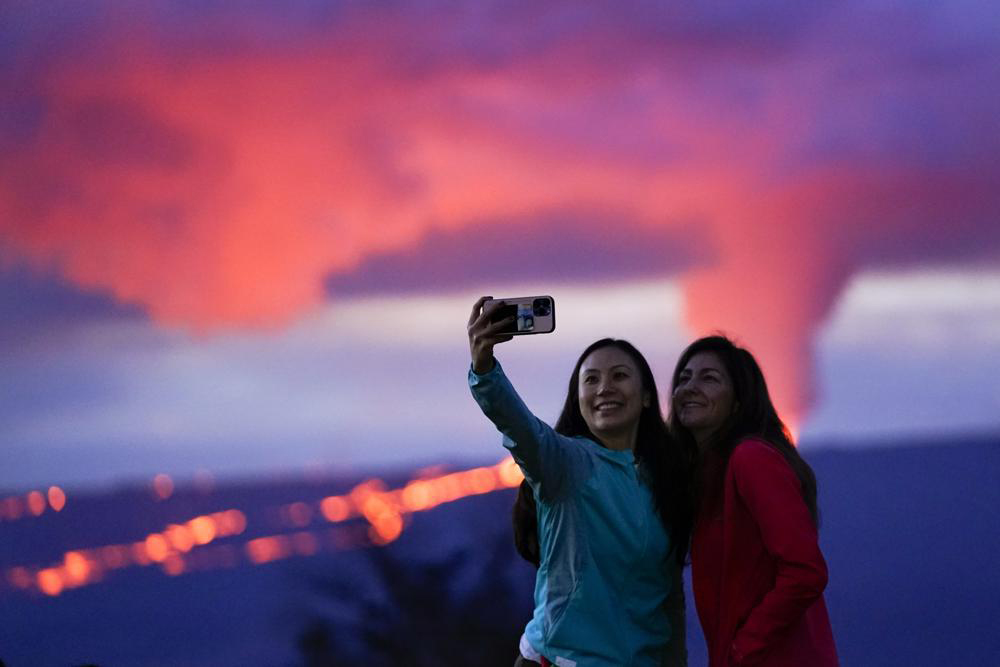 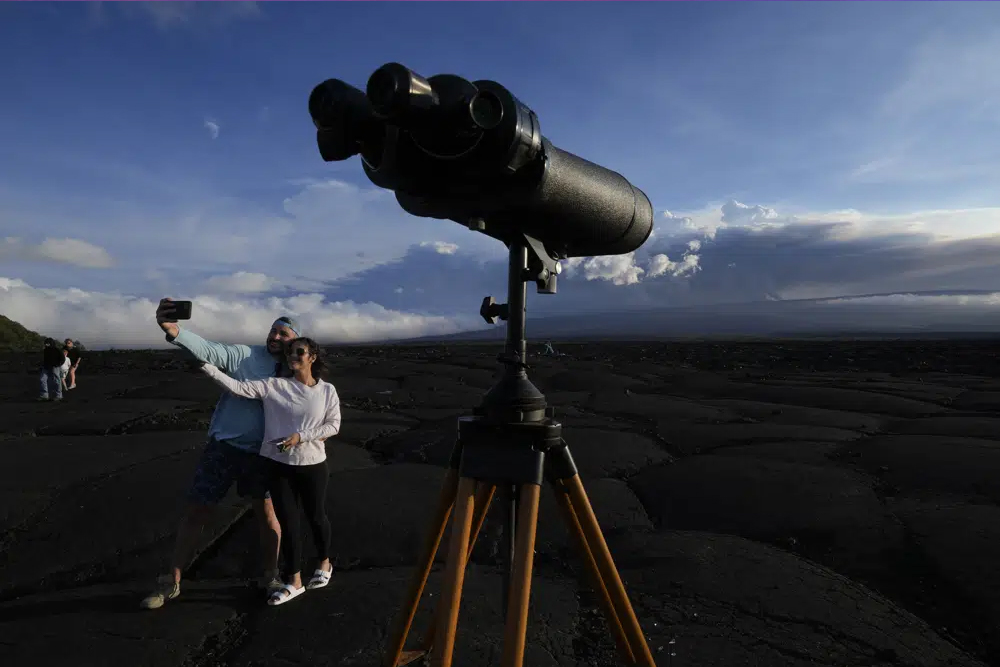 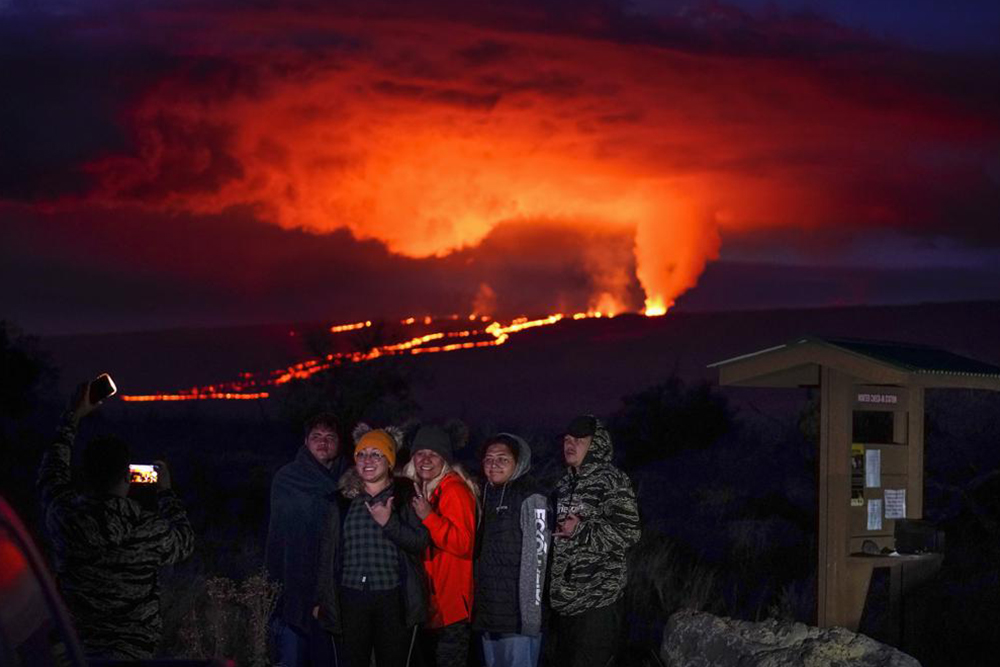 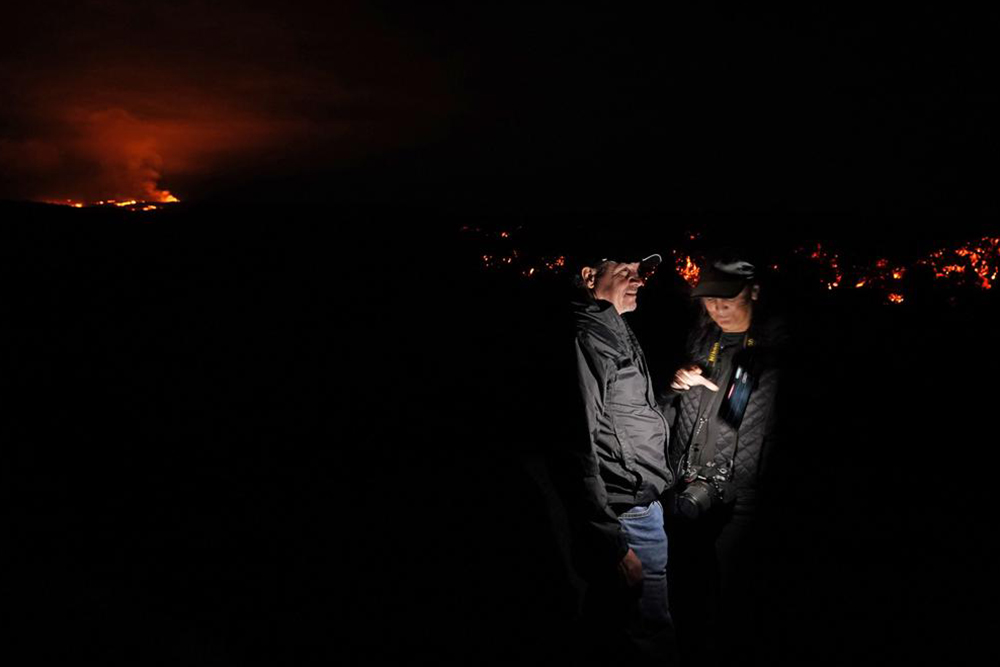 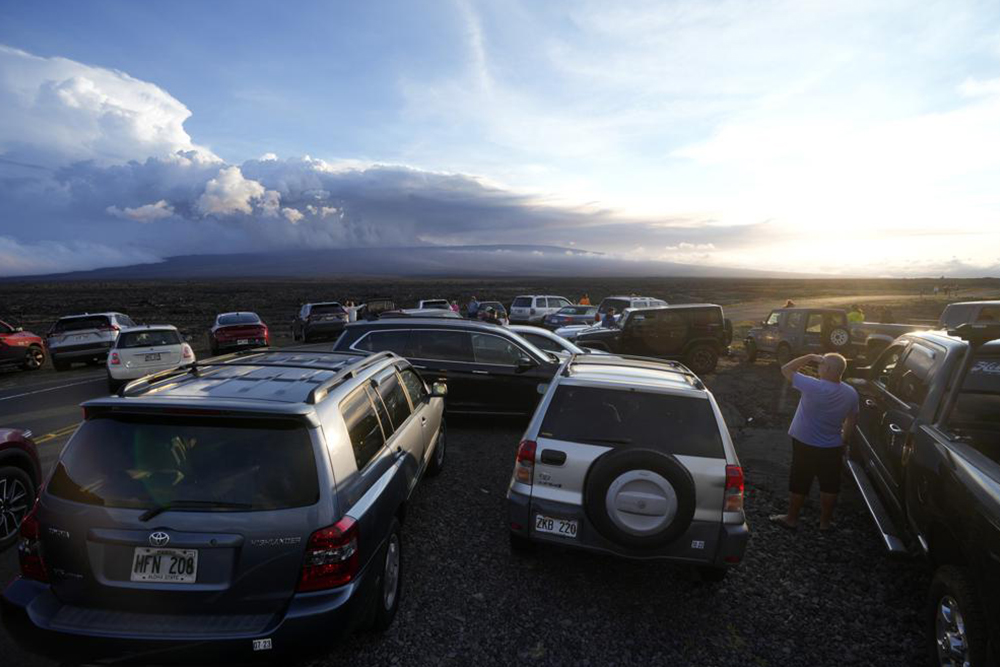 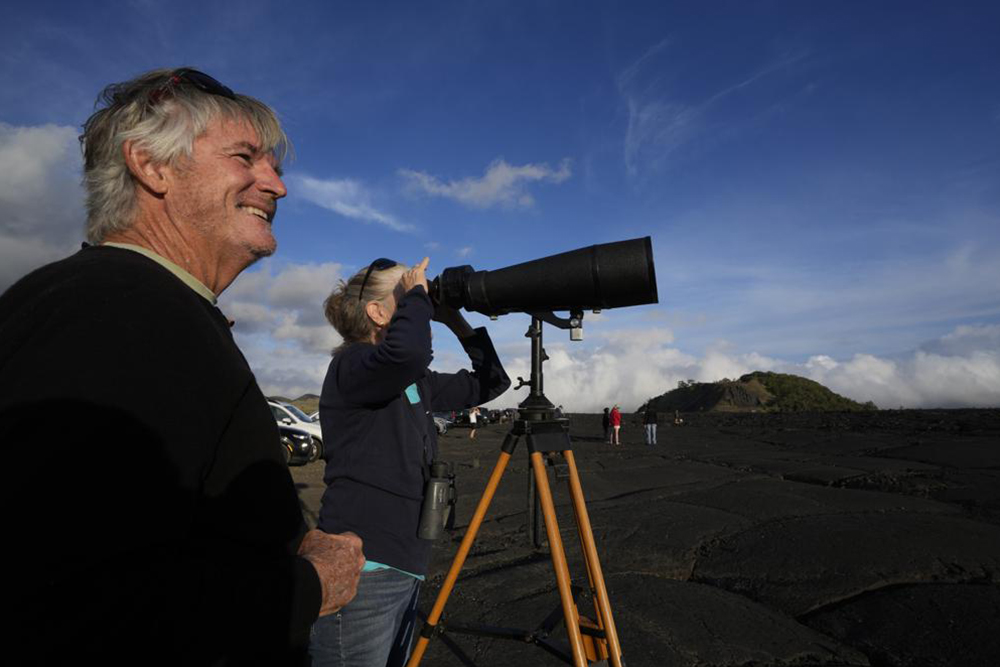 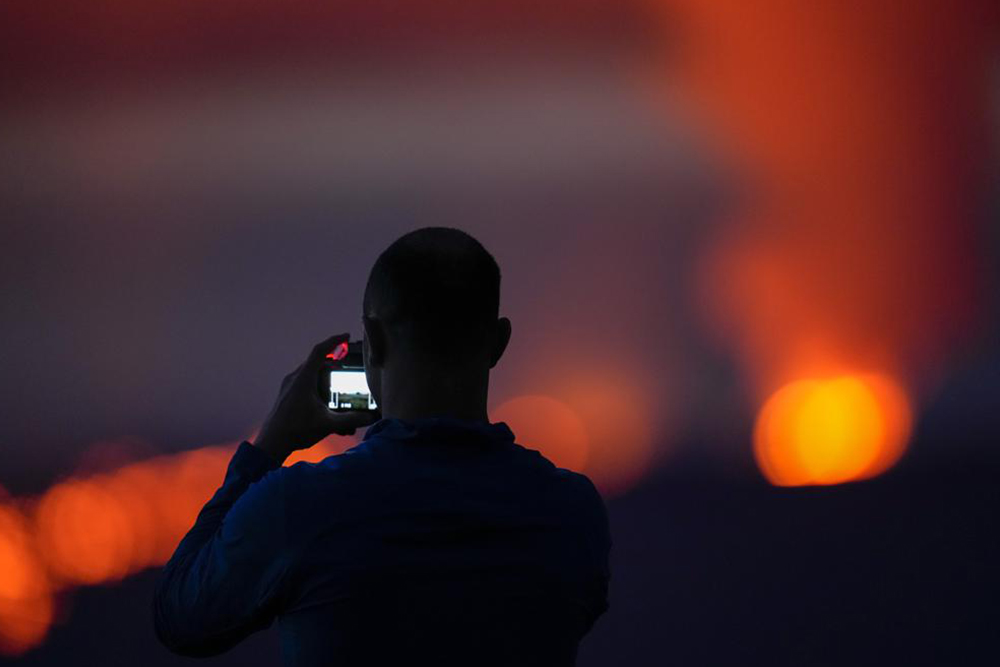 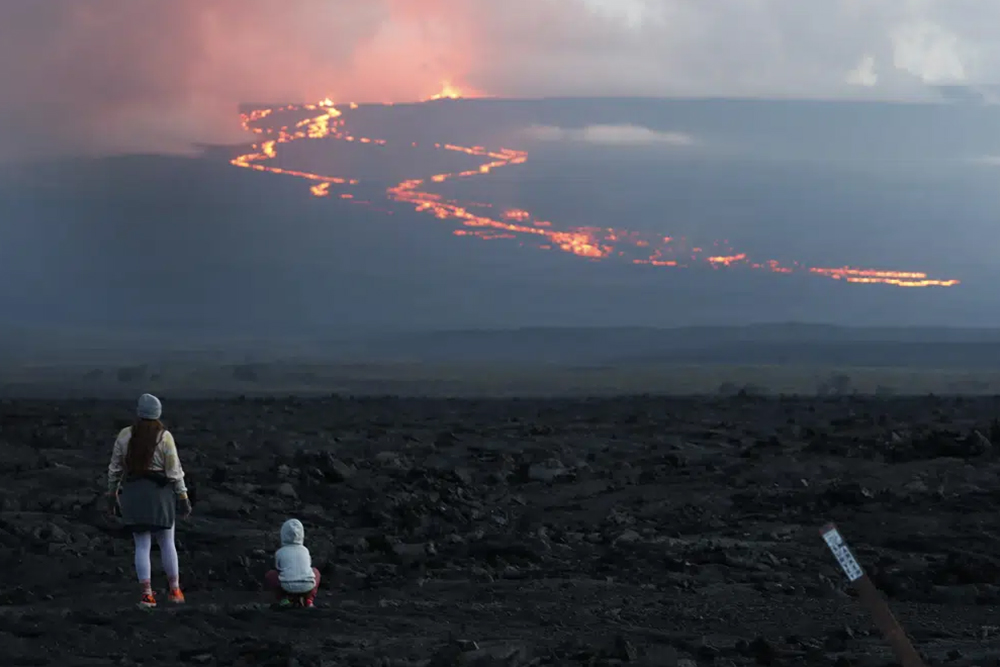 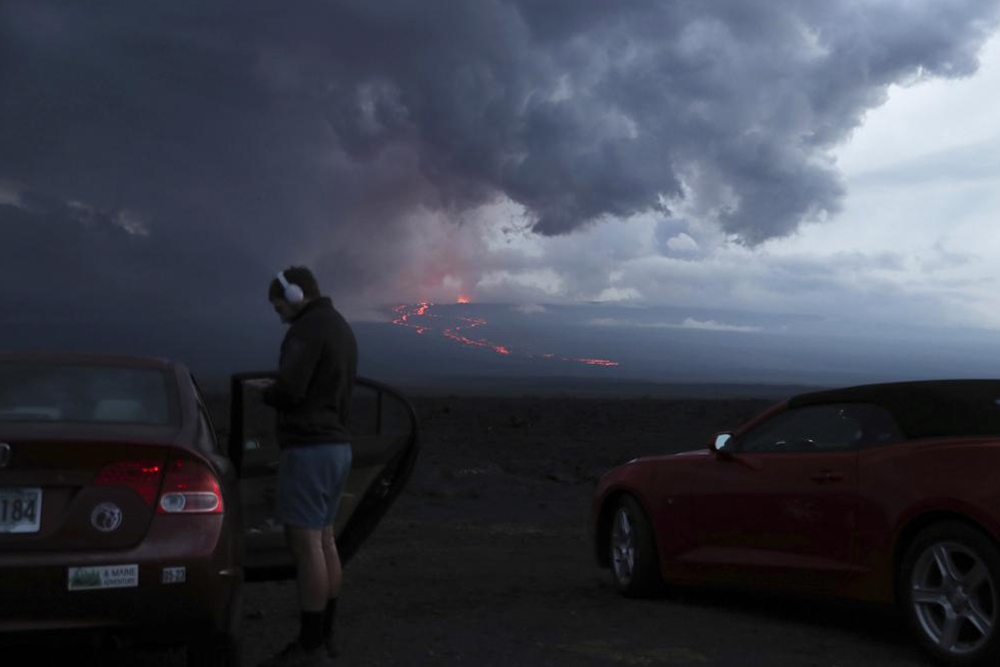 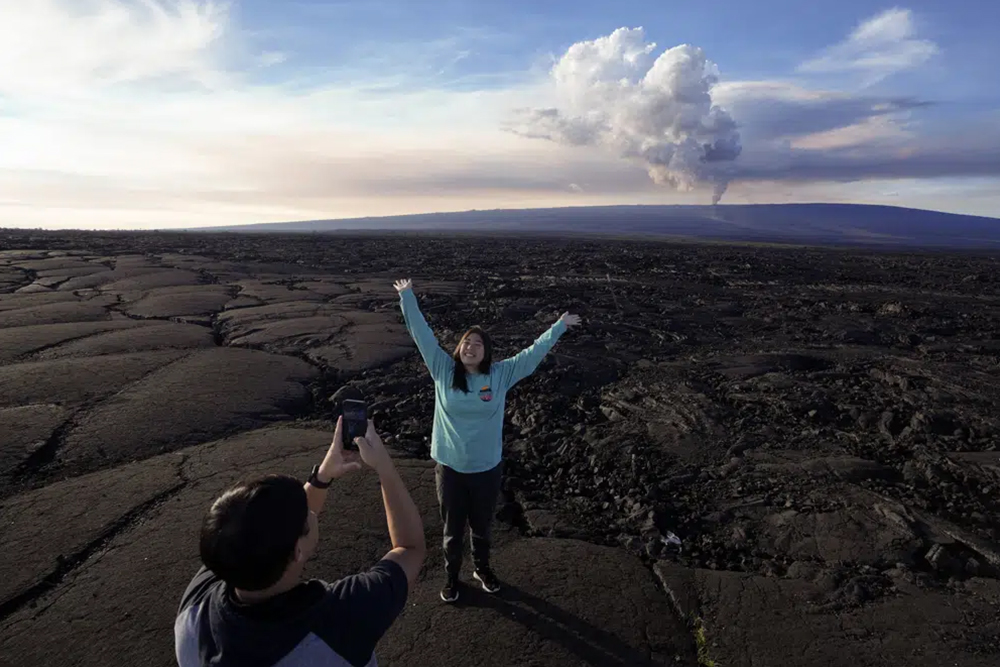 Mauna Loa, which means "long mountain" in Hawaiian, erupted at approximately 11:30 p.m. local time, after showing increasing signs of unrest since September 2021, according to the U.S. Geological Survey.

The volcano's earliest lava flows can be traced back to between around 600,000 to a million years ago, with scientists estimated that the Mauna Loa likely emerged above sea level about 300,000 years ago and has been rapidly growing ever since.

Mauna Loa has erupted 33 times since written records of eruptions began in 1843.

The last one happened in March of 1984, and lasted three weeks.

The most destructive of its eruptions recorded, happened in 1868, when 4,000 acres of land were destroyed and 77 residents died in landslides and a tsunami and landslides spurred by earthquakes.

The lava flow spanned five days, and the eruption is considered one of the deadliest natural disasters in Hawaiian history.