Mozilla starts rolling out Firefox 85, a version of the popular web browser that packs several improvements and updates.

Most notably, this version comes after an end of Adobe Flash support by all major web browsers. Apple was the first to disable Flash, followed by Google with Chrome 88 and Microsoft Edge a day later.

Following Adobe Flash's death, with Firefox 85, the browser no longer supports Adobe Flash, with no setting available to re-enable the support.

PWA allows web apps to create a consistent experience across different browsers, allowing them to mimic their abilities as apps, but by still delivered them the form of web apps.

With Firefox 85 stops supporting PWA, this marks one significant differentiation between Mozilla and other browsers created using Chromium.

Enough banishing, Firefox 85 then ramps up its privacy and security sector.

First, Firefox 85 aims to improve privacy by cracking down on the so-called supercookies.

"Trackers can abuse caches to create supercookies and can use connection identifiers to track users. But by isolating caches and network connections to the website they were created on, we make them useless for cross-site tracking.," Mozilla explained in a blog post.

"Over the years, trackers have been found storing user identifiers as supercookies in increasingly obscure parts of the browser, including in Flash storage, ETags, and HSTS flags."

"The changes we’re making in Firefox 85 greatly reduce the effectiveness of cache-based supercookies by eliminating a tracker’s ability to use them across websites." 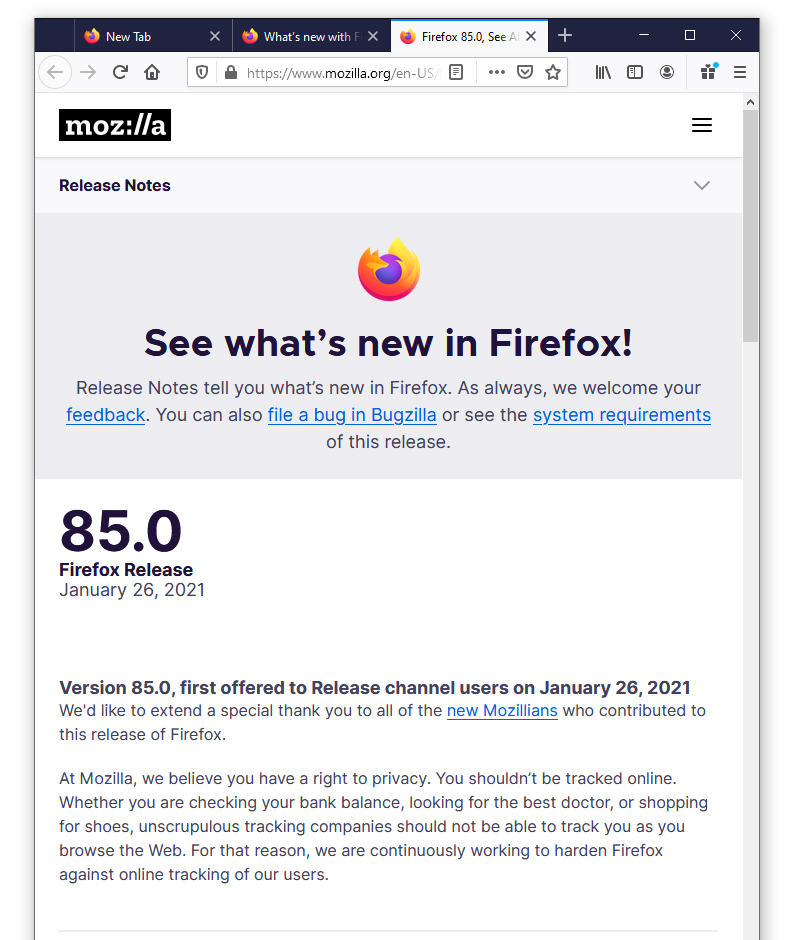 Just like other major web browsers, Firefox shares some internal resources between websites to reduce overhead. This is meant to save bandwidth and time.

For example, is an image can be cached, Firefox will use the cache it the same image is embedded on other websites, rather than loading the image from the network. Similarly, Firefox can reuse a single network connection when loading resources from the same party embedded on multiple websites.

Unfortunately, some trackers have been abusing these shared resources to track users around the web. By abusing Firefox image cache for example, the trackers can encode an identifier.

To prevent this, Firefox 85 uses a different image cache for every website a user visits. What this means, Firefox can still load cached images when user revisit a site, but it won't share those caches across sites.

This approach for securing privacy takes a little toll on speed, saying that its own page load testing saw between a 0.09% to 0.75% increase at the 80th percentile and below, and a maximum jump of 1.32% at the 85th percentile.