The Case Of The 'Sweet But Psycho' Girl: Viral Because Of Her Beauty And Insanity

The case of Isabella Guzman became a viral topic on TikTok and other social media platforms.

The video that was made a meme, uses the controversial Ava Max's song “Sweet but Psycho”, and showed how a “sweet-looking” girl smiled in the courtroom while wearing an orange prison jumpsuit.

Not many people know her.

The teenage girl who goes by the nickname "Isa", looks just like a normal teen at her age, and with physiques that fit a model. Her profile on Facebook was a watermelon slice with word "Love" carved on it. There were also photos of her wearing a 'Hello Kitty' off-shoulder top and jeans standing in front of a rock band set at a singing competition.

But unknown to most people around the world, the young woman is one of the representation of mental illness: she was charged with first-degree murder for brutally stabbing her own mother with a knife 151 times, with half of that on the neck and face.

Isabella was only an 18-year-old girl when she killed her mother.

The video was actually an old video, first posted in 2013. It resurfaced on social media to make a sensation again, with numerous teens started to recreate the "smiling" scene Isabella made during her trial with a challenge. Isabella in the courtroom during her trial, with faces as if nothing had happened. The TikTok post was dubbed with "Sweet but Psycho", referring to her gorgeous look and the inhumane act she committed.

Isabella has the beauty and the internet admitted that. But behind her alluring looks, no one on TikTok most notably, would have thought that she was a cruel and a cold-blooded murderer.

Isabella Yun Mi Guzman was born in Colorado, U.S. in 1995, a daughter of Yun-Mi Hoy and Robbert Guzman. The family was living harmoniously, and Isabella was living in a life she always wanted. From childhood to adolescence, she was a cheerful girl, friendly, kind, smart and the kind that never want to make trouble with anyone.

Unfortunately, that character she had, and the warmth she felt, didn't last long.

A misunderstanding between her parents led them to a divorce.

In other words, Yun-Mi Hoy had an extramarital affair.

This angered her so much that she started to show changes in her character.

Isabella hated her mother for marrying another man. She thought that her mother was too egoistic and selfish for doing this. She didn't want anyone to replace her father Robert Guzman.

It was since then that Isabella who used to a be that girl who always listens to her mother, became a totally different person.

Her personality changed so much that she turned from a loving girl into a brutal, rude and careless young woman.

According to her stepfather Ryan Hoy, before he married Isabella's mother, Isabella was still polite with her mother and even with Ryan Hoy. But things suddenly changed the moment he married her.

As a result of this, Isabella and her mother would argue and fight a lot, often with Isabella using harsh language and also violence. Hoy said that Isabella became more "threatening and disrespectful" to her mother, including yelling at her and spitting in her face.

But despite that, Yun-Mi Hoy still defended Isabella’s custody, and treated her well.

All the violence came up to one day that Isabella sent an email to her mother, threatening her by saying that: “You’re going to make up for it.” Afraid, Yun-Mi Hoy called 911 that soon dispatched a police to the house.

The police who came following the report for the domestic disturbance warned Isabella to watch for her behavior. After the police returned, he called Yun-Mi Hoy to inform that Isabella had been advised so she could return home safely. Police also ordered Yun-Mi Hoy to call them back in case something happened.

Isabella’s stepfather, Ryan Hoy, said that the girl locked herself in her room after that incident.

Yun-Mi Hoy also called her ex-husband, Robert Guzman, to help her advise their daughter. Guzman did that by visiting the house and chatted with Isabella.

Isabella who dropped out of Overland High School, didn't show any offence and behaved just like how a daughter should when talking to her parent. She showed respect to her biological father.

"I went to talk to Isabella and we sat down in the backyard looking at the trees and the animals and I started to talk to her about the respect that people should have for their parents," Guzman said. "And I was trying to let her know that she should be obedient to her parents, not rebellious, that she should try to listen more and everything was going fine."

Guzman thought that he could calm her little girl down, judging by himself that he was making progress.

But when Guzman left, the brutal Isabella returned.

Guzman failed to change her, and the murder happened shortly after that.

"I thought that I made progress. But obviously it didn't do nothing, because hours later, this thing happened."

"Isabella is a good kid, she's a good hearted," Robert Guzman said. "But I don't know what could've happened, honestly, to provoke this kind of reaction."

After returning from work at around 9:30 PM, Yun-Mi Hoy that was still afraid of her own daughter, entered her house and walked quietly but quickly, and went upstairs to take a shower.

Isabella knew this was going to happen as soon as her mother comes home. This is why she waited upstairs, waiting for her mother to enter the bathroom.

Ryan Hoy was downstairs when suddenly he heard screams of her wife from upstairs. He quickly ran to get to his wife and saw all doors on that floor were open except one: the bathroom door.

And suddenly, no sounds were heard. The silent was deafening for Hoy, who started panicking and fearing the worst. And soon after, that clearly happened as he saw blood starting to flow under the locked door.

Hoy quickly went downstairs to call 911 before returning upstairs, to realize that Isabella was just standing at the bathroom door holding a knife dripping with blood.

Isabella who was wearing a pink sports bra and turquoise shorts had an empty stare on her eyes. Without saying a single word, she went out of the bathroom, looked straight ahead as she walked past her stepfather as if he wasn't there, and walked through the front door to run away.

When the police arrived at the scene, Yun-Mi Hoy was found dead, naked with multiple stab wounds all over her body, neck and torso. There was also a baseball bat near her body, also covered in blood.

In a post mortem analysis, it was found that Yun-Mi Hoy had been hit with a blunt weapon, and suffered 151 instances of stabbing, including 31 instances on the face and 48 on the neck.

When Isabella ran away, she took a stop at a nearby shop. To the shopkeeper, she said that she was a rape victim and didn't want to return home. She also told the shopkeeper to not call the police. With her looks and appeal, the shopkeeper fell for it, and allowed her to go back of the shop to use the bathroom to wash her hair and change her clothes.

Isabella was caught the next day.

The girl was then charged with charges of murdering a first-class murder. And since she was already 18 when she was apprehended, she was meant to be charged as an adult and was eligible for a death penalty.

But what made the story so gruesome and chilling, and also viral on social media networks, is not only just because of her murder, but also because during her trial, Isabella was smiling as if nothing happened.

She was seen as if she was innocent. 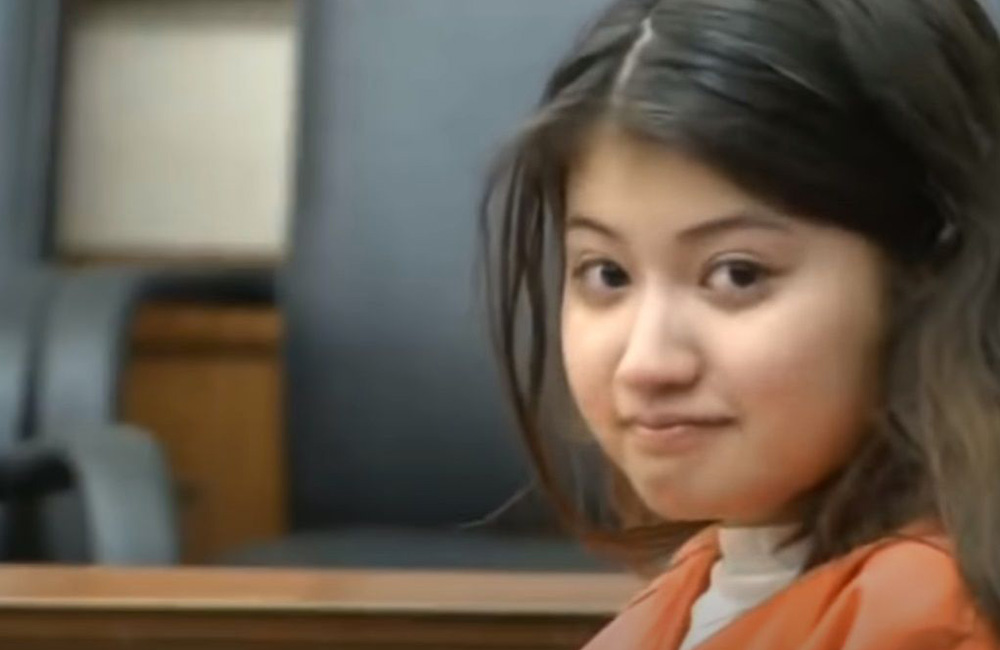 Isabella appeared to show no remorse for her actions, wearing orange jumpsuit with shackles on her wrists and legs, she even made faces at the courtroom camera.

During several tests by doctors, Isabella was said to have a mental disorder, diagnosed with Paranoid Schizophrenia.

This can be characterized by symptoms of schizophrenia, including delusions and hallucinations. These debilitating symptoms blur the lines between what is real and what isn’t, making it difficult for her to lead a typical life.

The doctors also said that Isabella once argued that she didn't stab her mother, and it was rather a woman named Cecilia who she killed to save the world.

Because of this, Isabella was not imprisoned, and instead was sent to the Government Hospital in Pueblo for medication and psychiatric treatment.

The 18th District Attorney, George Brauchler, said Isabella would remain there until she was no longer a threat to the public and herself.

“We punish people who make decisions to do wrong when they knew better and they could have done something differently,” Brauchler said at the time.

On the viral video, and on other platforms that the video was reposted or recreated, users would debate like to not link her beauty with her gruesome act, or to not put any sympathy on a such cold-blooded murderer.

Others said that they need to stop romanticizing, bullying and making jokes about Isabella because she has a mental disorder, and there is no reason to make fun of someone who cannot think straight. Others set examples of how this illness of hers should be taken seriously and shouldn’t be taken as a joke.

Many people also felt pity, and despite admitting that she is beautiful, killing ones own mother can be never justified for whatever reason.