This 'CICERO' AI From Meta Masters 'Diplomacy' At 'Human-Level Performance' Artificial Intelligence has come a long way. And with the advancements of technology, AI is only going to get smarter.

Meta, or formerly known as Facebook the company, is one of the leaders in the AI industry. The team at the company has been working to see what's what, and see what works.

And this time, the company has achieved yet another achievement, when it created 'CICERO'.

The AI in question is able to play astonishing well at the online version of Diplomacy, a popular strategy game in which seven players compete for control of Europe by moving pieces around on a map.

But unlike other board games that previous AI projects have mastered, such as chess and Go, Diplomacy requires players to talk to each other.

To win, players need to form alliances, negotiate tactics, and even spot when others are bluffing.

In other words, social skills are needed.

And here, CICERO can pass as a human in game negotiations.

"Games have long been a proving ground for new AI advancements — from Deep Blue’s victory over chess grandmaster Garry Kasparov, to AlphaGo’s mastery of Go, to Pluribus out-bluffing the best humans in poker. But truly useful, versatile agents will need to go beyond just moving pieces on a board. Can we build more effective and flexible agents that can use language to negotiate, persuade, and work with people to achieve strategic goals similar to the way humans do?"

Read more on our blog

According to Meta, the CICERO AI is able to play Diplomacy, and achieved more than double the average score of the human players, and ranked in the top 10% of participants who played more than one game.

CICERO's achievement is notable, simply because the game requires deep interpersonal negotiation skills, which implies that CICERO has obtained a certain degree mastery of language necessary to win the game.

On top of that, not only that the AI can play the game, but also trounce human players without ever revealing its true identity.

For all this time, empathy, the use of natural language, and the ability to build relationships are considered difficult tasks for computers to be taught to understand.

And Meta seems to have nailed it.

To create this AI, Meta pulled together AI models for strategic reasoning, in which the method being used is similar to what was used to create AlphaGo. It also uses a similar same natural language processing method like GPT-3.

Meta here, put the methods together into one single agent.

During each game, CICERO will look at the state of the game board and the conversation history and predicts how other players will act. The AI can then develop a plan that it executes through a language model that can generate human-like dialogue.

This allows it to coordinate with other players.

To build CICERO's controllable dialogue model, "we started with a 2.7 billion parameter BART-like language model pre-trained on text from the internet and fine tuned on over 40,000 human games on webDiplomacy.net," explained Meta. 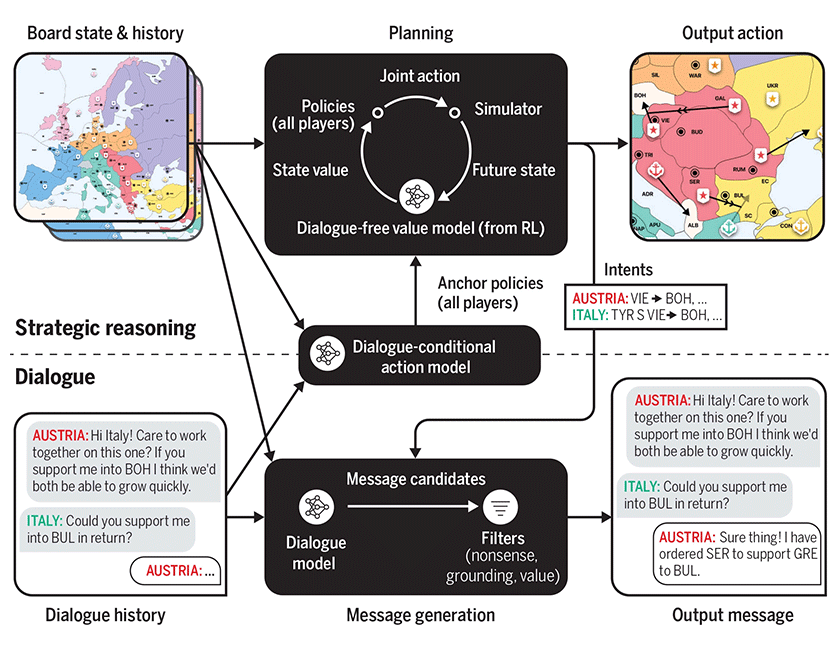 The architecture of CICERO.

Although CICERO still has errors and a weaknesses, the AI marks a huge step forward towards the creation of AIs capable of solving complex problems.

With the advancements of technology, this kind of AI can be made to help humans plan routes around busy traffic, or even negotiate contract, or even create a much better digital assistant.

Meta suggests that its CICERO research could also "ease communication barriers" between humans and AI, such as maintaining a long-term conversation, or to teach someone a new skill.

The technology could also be used to power video games, where NPCs can talk just like humans, in which the AI can be made to understand the player's motivations and adapting along the way.

"CICERO can deduce, for example, that later in the game it will need the support of one particular player," said Meta, "and then craft a strategy to win that person’s favor—and even recognize the risks and opportunities that that player sees from their particular point of view." 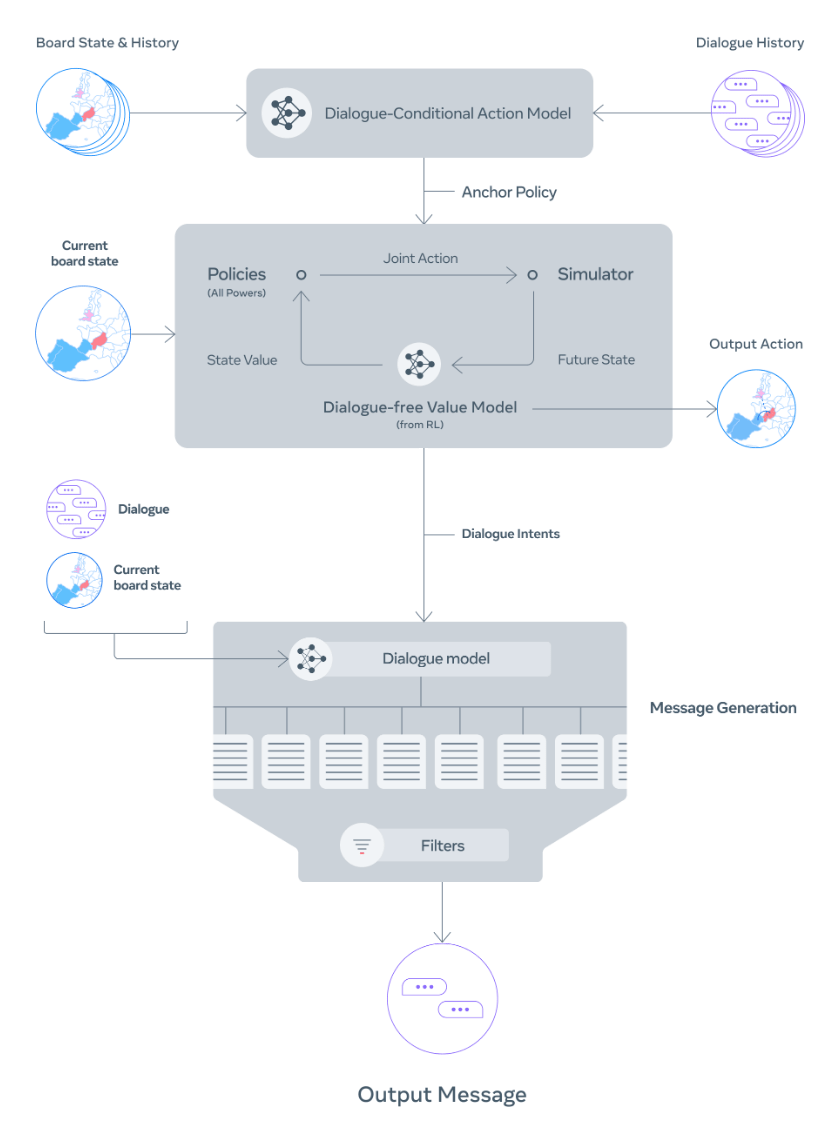 While there are many advantages of this kind of AI, the technology could be used for manipulation.

For example, the AI can be made to impersonate other people, and trick them in potentially dangerous ways, depending on the context.

So here, Meta hopes other researchers can build on its open-source code "in a responsible manner," and said that it has taken steps toward detecting and removing "toxic messages in this new domain." which likely refers to dialog Cicero learned from the Internet texts it ingested—always a risk for large language models.

DeepMind also has a similar AI that uses deception to win a board game.