Donald John Trump is best known as a businessman, and later, also a President. But after that, he is also known as a person banned from all major social media networks.

Trump is regarded as the first country leader that is permanently banned from Twitter. At this time, the 45th U.S. President from 2017 to 2021 is also banned from Facebook and some other platforms.

This happened because Trump used to share his inflammatory rhetoric speech to the public, which ultimately led to violence and his refusal to accept his loss in the 2020 election.

The social media platforms were concerned over the possible spread of even more hate speech and threats that can follow Trump's remarks.

And banning him was meant to silence him.

With Trump replaced by Joe Biden, Trump is still working to make his way up again, or at least among his supporters and fans.

Read: Sudden Drop In Fake News After The Banning Of Donald Trump From Various Online Platforms 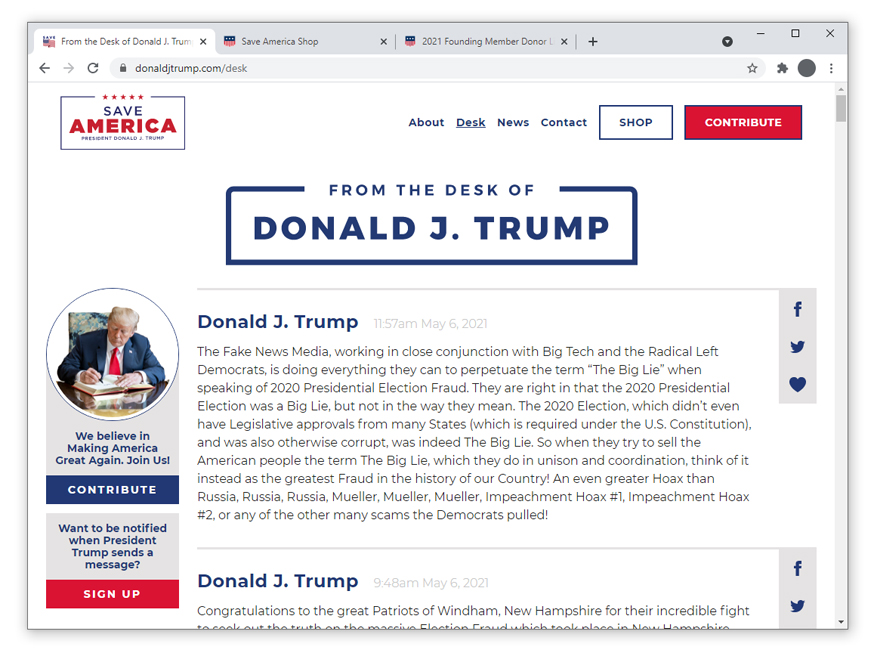 But knowing that he is banned from using most major social medias, he created his own platform, so he could do whatever he wants.

Through the platform, Trump started 'tweeting' again 'From the Desk of Donald J. Trump'.

A platform is designed to be very much like Twitter, the social media that was Trump's favorite.

The Twitter replica appears in a single page that is attached to his website, prepopulated with snippets from Trump’s press releases stretching back to March 24.

Every post has “Donald J. Trump” at the top, along with a time stamp.

But unlike Twitter or any other social media platforms, this Trump's "desk" doesn't allow anyone to comment or reply to the posts.

Liking only toggles the blue heart to a red heart, without any counter.

Unliking is not an option.

"In a time of silence and lies," a video Trump posted to the platform said.

The video then plays news reports describing him being banned from using Twitter.

"A beacon of freedom arises. A place to speak freely and safely," the video continues, showing the platform. "Straight from the desk of Donald J. Trump."

From its aesthetic and functionality, this platform Trump is using is more like a blog than a social media.

According to numerous reports, Trump is a social media–obsessive former President, who wants to keep on "tweeting" whatever he wants to his fans and followers, with no one being able to stop him.

"This is just a one-way communication," said one source familiar with the platform.

"This system allows Trump to communicate with his followers."

Besides allowing Trump to share his thoughts and opinions to the public, the platform also allows his fans and supporters to donate or shop for merchandises.